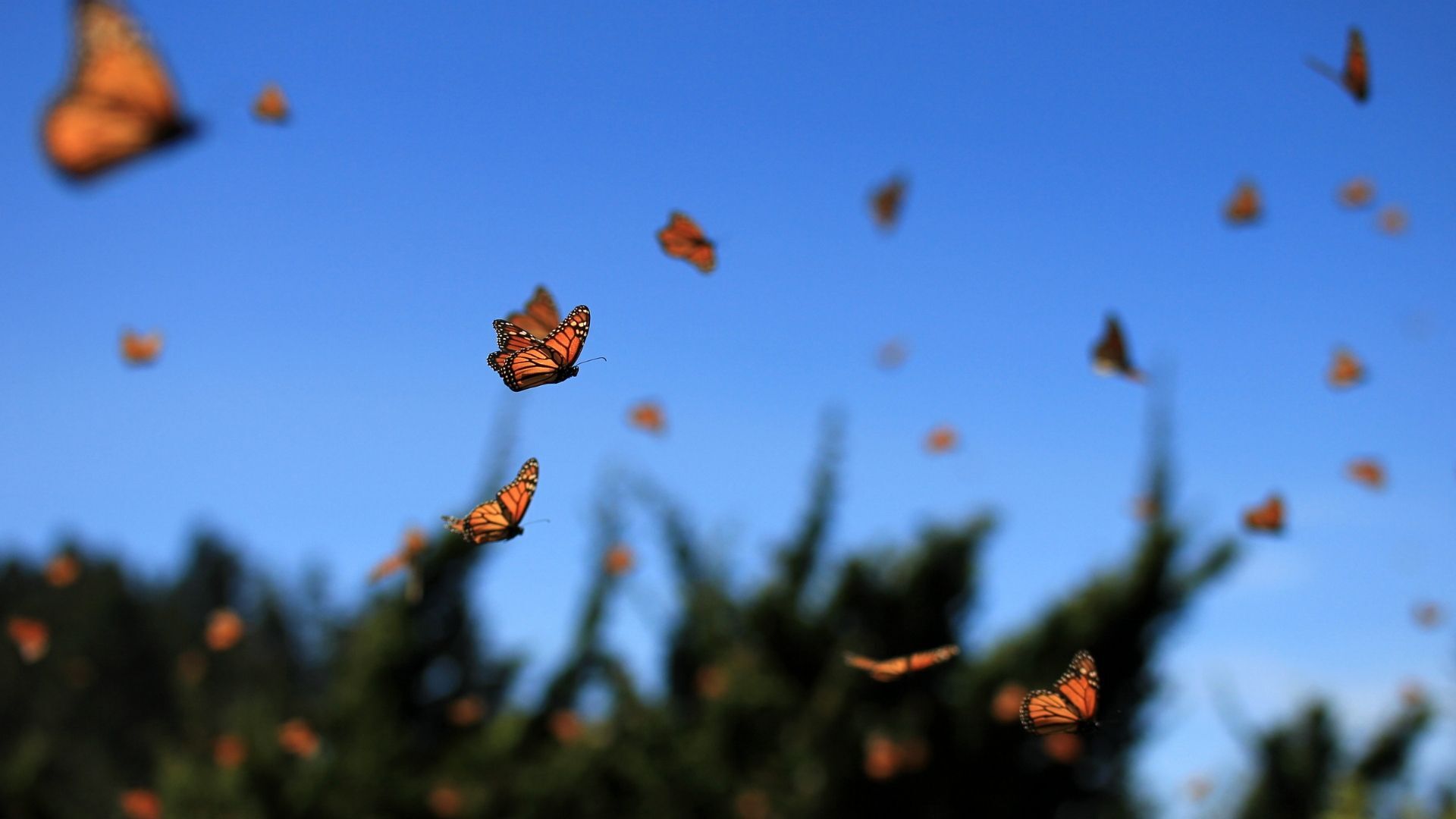 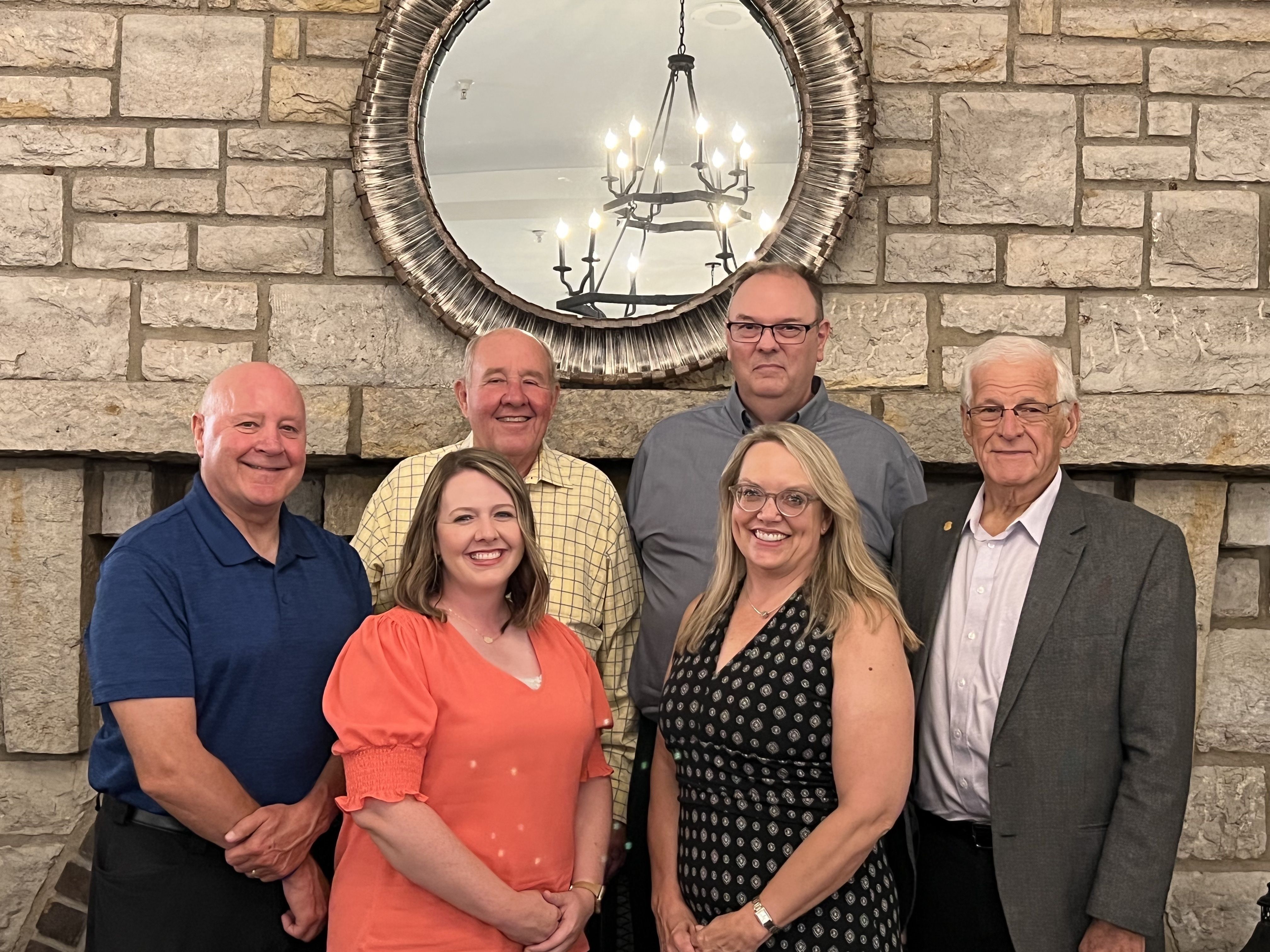 Northwest Missouri [NWMO] is part of America’s heartland crossroads bounded by the Missouri River, Iowa, Kansas, and Greater Kansas City. This 18-county region is the service area of The Community Foundation of Northwest Missouri [CFNWMO] and its regional vitality initiative, Maximize NWMO. The region is also served by three U.S. Department of Commerce Economic Development Administration [EDA] Regional Planning Commissions and many other local, regional, state, and national entities. NWMO residents reside in four categories of population (See Figure P.1.a. (1) – A): Rural Nonmetro, Noncore; Rural Metro; Rural Nonmetro, Micropolitan; and, Urban Metro. All, but one county identifies as rural in population and culture.

This region covers a lot of geography with a relatively sparse population. The 18 counties support just over 250,000 people across a total of 9,307 square miles (U.S. Census, 2020). The population is down by almost 5% over the last decade due to net domestic out-migration and negligle natural increase. Buchanan County (St. Joseph), the only metro area, lost nearly 10% and Nodaway County (Maryville), the only micropolitan, lost 7% of its population. Andrew County was the only county to gain slightly in this period while DeKalb (-15%), Holt (-14%), Sullivan (-10%), and Atchison (-10%) counties lost substantial population. 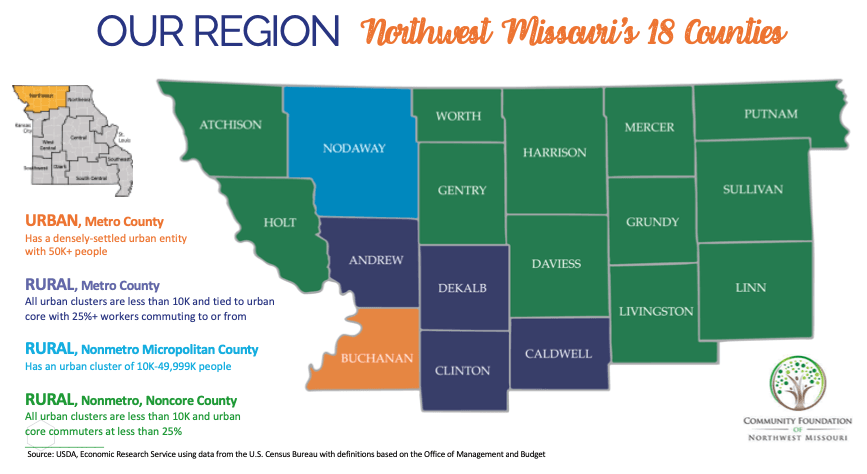 Urgent Challenge and Opportunity. This region, like much of Rural America, is challenged to expand and create new economic endeavors that can sustain, revitalize, and grow the region’s numerous communities. The emptying rural workforce pipeline and the resulting fear and attitudes of resistance to change continue to threaten and undermine the future. Smaller and larger trade center communities are at risk of survival. Further addressing the reasons why people leave, and finding ways to attract former residents to return is recommended by experts consulted and residents surveyed.

Yet, while challenged with outmigration, the region is proving in this new decade to also be a great area for social gathering in some of the revitalized downtowns as well as the beautiful state parks, conservation areas, campgrounds, hiking trails, and hunting and fishing locations. The region is connected to larger markets thanks to a robust transportation system of two Interstate freeways, several multistate highways, railways, small airports, and our proximity to the Kansas City International Airport, in Kansas City, MO, Omaha, NE’s many resources to the northwest, and Des Moines, IA’s industry to the north. Our cost of living is lower than many parts of the country, which makes it attractive to those working remotely and looking for smaller satellite business locations. And, as high-speed broadband availability in more areas grows, the region is well-positioned to finally turn around the relentless crisis of chronic and severe depopulation, and the corresponding erosion of community and economic vitality. Whether the region’s leaders will work together across sectors to leverage all of these advantages is what Maximize NWMO is aimed at addressing.

Regional Community Identity. NWMO’s regional identity is historically both independent and collaborative; perhaps because of our deep agrarian roots, political and religious diversity and independence, and family-focused values. Like many rural areas, settlers and modern-day residents are naturally inclined to think entrepreneurially out of necessity. When they need something, people either make do or make something better when faced with the challenges of living more than a few minutes away from a wide variety of retail and service industry options. Famous innovators, including the masterminds of the Pony Express, Walt Disney, Dale Carnegie, and J. C. Penney, modeled their companies from NWMO unique spirit and values. They all designed improvements to life because they saw needs to be filled balanced with a desire to hold onto aspects that were dear to them. J. C. Penney understood that people needed to be met with quality and affordable retail goods where they lived in smaller towns and cities. Disney’s iconic “Main Street” reflects the boyhood memory of his small hometown of Marceline, but more importantly, it reflects the positive virtues of safety, prosperity, kindness, industriousness, love, and belonging that many Americans indicated decades ago, and still indicate based on the 2020 Alumni & Resident Survey, wanting more of in their lives. Particularly, current and former residents with strong ties to the region who moved away for education, jobs, careers, marriage, and other reasons.