St. Johns County, Florida encompasses approximately 680 square miles of land in Northeast Florida, situated between the St. Johns River and more than 40 miles of beaches along the Atlantic Coast. It is a part of the Jacksonville Metropolitan Area.  The U.S. Census Bureau 2018 population estimate for St. Johns County is 254,261. The County was ascribed the 8th fastest growing county in the United States from 2017 to 2018 with the total population more than doubling since the year 2000. The northern part of the county is a bedroom community for Jacksonville while the remainder of the county is more tourist oriented, and includes locations, such as St. Augustine (the oldest continuously occupied European settlement in the continental United States), Ponte Vedra Beach and St. Augustine Beach. There are also more sparsely populated rural communities in the Southwestern part of the county in the communities of Elkton and Hastings. The county includes downtown St. Augustine with its many historical and tourist attractions, world-class beaches, the St. Johns River bordering the western edge of the county and the Intracoastal Waterway and Atlantic Ocean to the east. The annual Tournament Players Championship is held at the TPC Sawgrass in Ponte Vedra Beach each spring. These attractions bring more than 6 million annual visitors to the county. 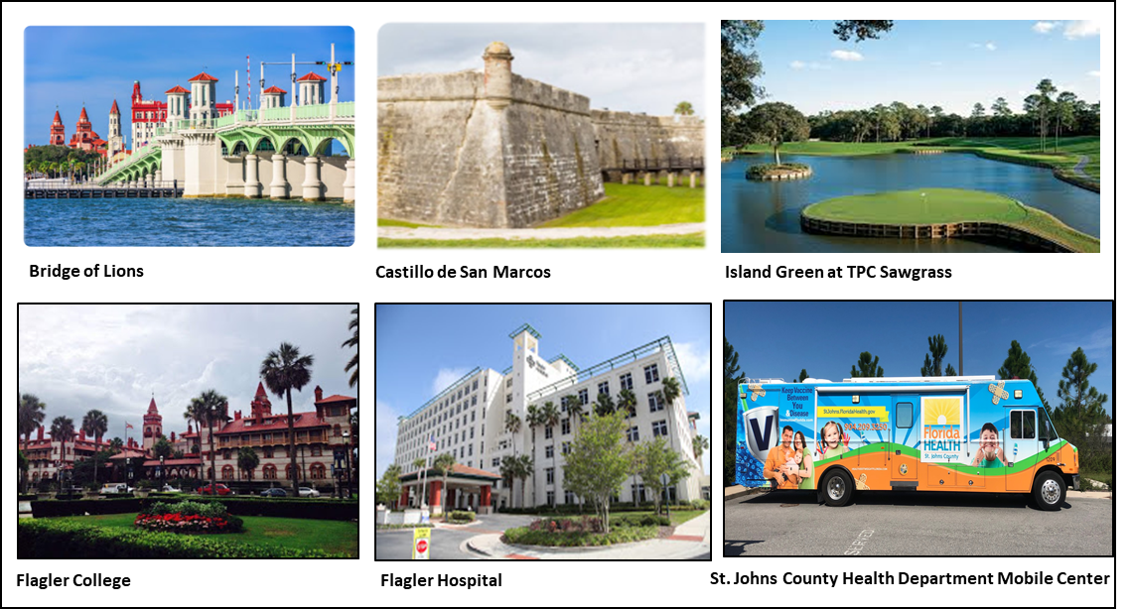 St. Johns County has been ascribed as the Healthiest County in the state for the past eight years by the County Health Rankings Report (Robert Wood Johnson Foundation and the University of Wisconsin Population Health Institute) and has the number one public education system in the state for the past ten years (Florida Department of Education). St. Augustine has been ascribed by Money Magazine in 2018 as the best place to live in Florida, the local community hospital (Flagler Hospital) has been designated as one of America’s 100 Best Hospitals by Healthgrades, and the Florida Department of Health in St. Johns County is a four-time recipient of a top-tier Florida Governor’s Sterling Award (state Baldrige Award).

Residents and visitors have many opportunities for education and recreation. St. Johns County has more than 40 public school facilities and three colleges including Flagler College located in the heart of downtown St. Augustine, on the site of the historic Ponce de Leon Hotel. There are also numerous county, state, and national parks, beaches, campgrounds, restaurants, as well as other tourist attractions making St. Johns County an excellent place to visit, live, work, play, and age.